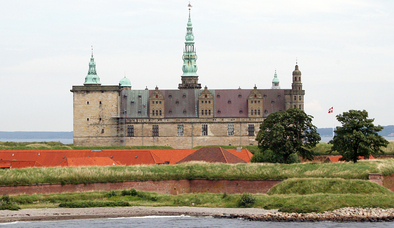 Kronborg (or Elsinore) Castle, Denmark
Like Shakespeare's England, Denmark was a somewhat recently Protestant country. Making Denmark a foreign-yet-familiar setting for English audiences. Shakespeare's actors seem to have visited Kronborg in 1586 and shared some details with Shakespeare.

Shakespeare also picked Denmark because "Hamlet" is loosely based on Danish history. Additionally, parallels are often drawn between the legend of Amlet and English romances from when Danish Vikings ruled Britain. 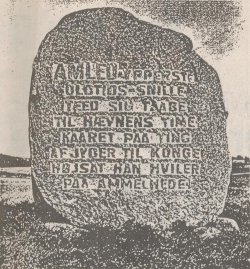 Amlet's burial stone*
Saxo Grammaticus wrote many books of the "Gesta Danorum" ("Deeds of the Danes") which is a an extremely patriotic work of Danish History. It is sixteen books long and written Latin (Shakespeare knew Latin) it is not considered mythology but the glorious history of Denmark. It is unclear what Saxo's sources were.

Amlet is the harsh tale of two brothers, Hardvendel and Fenge who are the governors of Jutland under King Rorik. Hardvendel comes back from killing vikings and marries Rorik's daughter, Gerut (Gertrude). Gerut bares a son, Amleth. Fenge is extremely jealous, which drives him to murder his brother. Once Harvendel is dead, Fenge pursues Gerut and convinces her to marry him. Amleth grows up afraid of being murdered, so he pretends to be a fool and speaks only truth-telling riddles to protect himself. Fenge then sends a series of tests Amleth's way in order to prove that he is not really an imbecile. One of these tests is that Fenge sends a beautiful girl to seduce Amleth, this girl is the carnal pre-Ophelia character. In the legend, when Amleth slays the eavesdropper in his mother's room, the way Amleth covers his tracks so perfectly is what convinces Fenge that Amleth is feigning his foolishness.

Then Amleth was dispatched to Britain with a letter ordering for his death. Amleth guesses the plan and changes the wooden tablets to read that the two attendants he is traveling with should be murdered and Amleth should marry the King's daughter. Amleth marries the princess and returns to Denmark a year later, having accumulated much wealth. He arrives to Denmark just in time for a funeral feast-- his funeral. Amleth enters the feast disguised as a fool and then takes his vengeance. During the feast, he gets the courtiers extremely drunk and then fastens them down over the wooden hangings of the hall with sharpened pegs, and then sets fire to the palace. Amlet is sure to run Fenge through with his own sword.

When this is done, Amleth is proclaimed king. Amleth returns to Britain to fetch his queen to discover that his father-in-law and his father had a pact to avenge the other's death. Amleth is therefore sent to Scotland to woo the terrible Scottish queen who has killed all of her other suitors. However, she falls in love with Amleth and he marries her too. Amleth returns to Britain to find that his first wife still loves him. He then fights a battle against he British king and wins by putting the dead on spikes and terrifying his enemy.

Amleth returns to Jutland with his two wives and meets Rorik's successor, Wiglek, who wins against Amleth. Saxo states that Amleth was buried on a heath in Jutland. In 1933, a stone was raised in Amleth's memory on his historic burial mound. The mound, however, is from the Bronze Age, around 1700 years before the time Amlet was supposed to have lived according to Saxo.
*the stone's inscription reads:
Amled chief
Ancient dear
Teed himself silly
For vengeance hours
selected at things
Of Jutland king
high seated, he rests
Upon Ammel Heath