Before Ophelia's mad scene when she hands out flowers, there is rank garden imagery in "Hamlet". According to Hamlet, the entire world "tis an unweeded garden, / That grows to seed; things rank and gross in nature / Possess it merely" (1.2.6). The word "rank" shows up again and again in order to describe the incestuous marriage between Gertrude and Claudius:
Nay, but to live
In the rank sweat of an enseamed bed,
Stew'd in corruption, honeying and making love
Over the nasty sty,– (3.4.14).
Hamlet sees the world as a ruined garden, which conjures up images of Eden. While his father was alive, Denmark was like Eden to Hamlet and now sin has ruined his world. Even the Ghost's language supports Denmark-as-Eden, as the Ghost says:
'Tis given out that, sleeping in my orchard,
A serpent stung me; so the whole ear of Denmark
Is by a forged process of my death
Rankly abused: but know, thou noble youth,
The serpent that did sting thy father's life
Now wears his crown. (1.5.8) 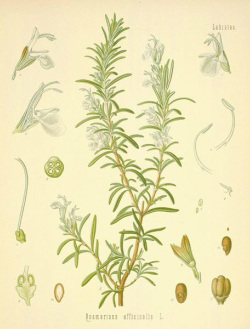 Based on the themes of the play, Ophelia's actions in madness are not completely surprising. In handing out flowers, Ophelia is trying to communicate and could be trying to restore a rotten Denmark's beauty.
Rosemary is said to be able to improve memory. In Mythology, it was draped around Aphrodite when she was born of the sea. The Virgin Mary is said to have spread her blue cloak over the plant when she was resting, turning the flowers blue-- this is why it's named "Rose of Mary".

In the Middle Ages, rosemary was associated with wedding customs. The bride would wear a crown of rosemary and the wedding guests and groom would wear a sprig around their finger. Because of its use in weddings, rosemary became used as a love charm. Married couples would plant a spring of rosemary and watch how it grew as an omen for how their marriage was. If a young person tapped another with a sprig of rosemary, then they would fall in love. Rosemary was also used to ward off nightmares and witches; which made rosemary associated with women which began the tradition of men tearing up rosemary plants to show that they were in charge of their homes.

In Elizabethan England, sprig of rosemary were attached to the clothes of mourners to identify them as mourners.

and there is pansies, that's for thoughts 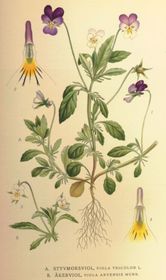 The pansy got its name because the flower resembles a human face, said to nod forward as though in deep thought in the month of August. "Pansy" is from the French "pensée", meaning "thought." Pansies are symbols of thought and faithfulness. Pansies are also associated with togetherness and union. They are often used in memorials to remind the living to remember the dead whom they loved.

there's fennel for you 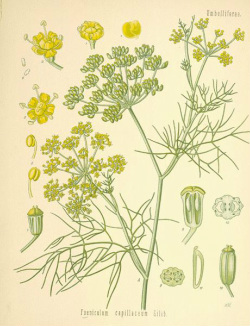 Fennel is often featured in Greek mythology. Prometheus uses fennel in order to steal fire from the gods and the Bacchanalian wands of the god Dionysus and his followers were said to have come from giant fennel plants.

When picked, fennel wilts very quickly. For this reason, fennel came to be associated with flattery, foolishness and cuckoldry. Like most flowers, fennel did not have one meaning. It was also believed that fennel could ward off evil spirits when kept on the person. 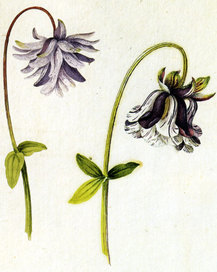 Columbines are considered one of the most beautiful plants. They are toxic but have been used in medicine and homeopathy since the sixteenth century. In Ancient Rome and Greece, the spur of the columbine provoked a phallic image and therefore the columbine came to be considered Aphrodite's flower. In the Christian tradition, the columbine is associated with the praise of God. The spurs on the flowers are reminiscent of five doves sitting together and thus of the Holy Spirit. ‘Five birds together’ was a name for the plant in parts of Austria and the English name, columbine, little dove or dove-like, also alludes to this. Columbine appears often in paintings with Christ, representing not Christ but resurrection.

there's rue for you; and here's some for me 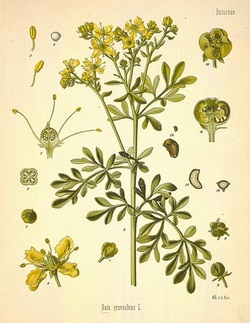 Rue or "herb-of-grace" represents sorrow, regret and repentance. It is an extremely bitter herb which causes blistering when left on the skin for too long. It was also used in medicine, especially to ward of plagues, and for this reason it became associated with healing and protection.  It got the name "herb of grace" because it was used as a tool in asperges during exorcisms and before performing Mass.

Rue contains two chemicals which can cause abortion in early pregnancy. Soranus, a gynecologist from 2nd-century Greece, described its use as a potent abortifacient. Women in Latin America have eaten rue in salads as a contraceptive and drunk rue tea as emergency contraception or to induce abortion. If ingested regularly, rue can decrease blood flow blood flow to the endometrium which makes it impossible for the egg to stay in the uterus. 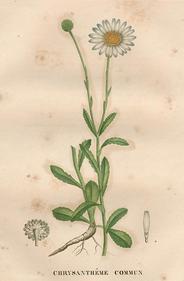 In Roman mythology, a nymph was dancing in the forest. Her dancing drew the attention of lustful men, so she turned herself into a daisy in order to protect herself. For this reason, the daisy has come to be associated with modesty and simplicity. Plucking th petals of a flower saying, "He loves me, he loves me not" originated with the daisy. In contrast to the idea of love, when a person is offered the Michaelmas Daisy it means "farewell".

Daisies were also believed to have healing powers and bring good fortune-- Henry VIII ate daisies in order to ease the pain of his ulcers and daisies steeped in wine were believed to cure insanity. Farmers looked for daises in order to predict the changing of the seasons and Spring could not come until one had stepped on twelve daises. Dreaming about daises in the Spring and Summer brought good fortune while dreaming about them in the Fall and Winter brought the opposite.

The daisy is also a symbol of innocence and purity and undying love.

I would give you some violets, but they withered all when my father died 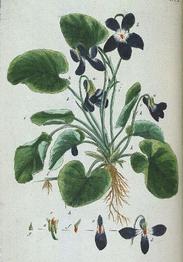 The Athenians used violets to moderate anger, to obtain sleep, and comfort the heart. The Ancients' name for violets was “Iona”. Zeus had fallen in love with the lovely nymph, Io, and changed her into a white cow in order to protect her from his wife’s wrath. Zeus gave Io pastures in which to graze. Io wept over the bad taste of the grass, so Zeus turned her tears into flowers only Io was allowed to eat. The Athenians revered the violet, decorated their houses with it, and wore crowns of violets at their feasts and on festive occasions.

In Roman mythology, violets are a product of Venus' wrath and jealousy. Venus was extremely jealous when Cupid judged human maidens to be more beautiful than her. In a fury, Venus beat the maidens until they were purple and blue-- thus turning them into violets.

In Macer's Herbal (10th C) the violet is among the herbs which were considered powerful against 'wykked sperytis.' Violets were used frequently in Medieval medicine in various tonics, their healing ability was widely accepted. In Christian art, the violet symbolizes the Virgin Mary's humility.

Because of all these myths and associations, violets are a symbol of innocence and chastity.

There is a willow grows aslant a brook 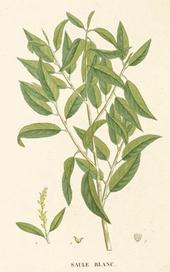 Willows are a symbol of mourning ("weeping willow"). Willows are often believed to have magical abilities and are associated with healing because their leaves contain aspirin. The tree was thought to gossip, so no one should tell a secret in front of it or the secret will be repeated on the wind.

Pausanias, the Greek historian (2nd C), writes of a grove sacred to Persephone, where willows grew. Orpheus, of the underworld, is also described as holding a willow branch. On Circe's island, there was said to be a grove of willows from which corpses hung.

Willows have also been a symbol of forsaken love, it was once a practice to wear willow when one had been jilted.

(Wiccans think willows are the plant of immortality.)

There with fantastic garlands did she come/ Of crow-flowers... 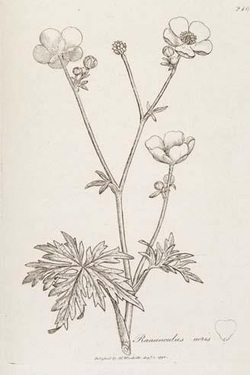 Crow-flowers, or buttercups, are poisonous. They are meant to remind someone of their poor behavior. They can also represent health, childishness, and virginity. Handing someone a bouquet of buttercups can be considered a genuine and affectionate way of reprimanding a loved one for being too childish.